$3,450
The Pettengill percussion revolvers were some of the most unique American handguns of the mid 19th century. The self-cocking action with the concealed hammer gave the gun a unique or as some call it ‘odd’ profile.
The book ‘American Percussion Revolvers’ by Sellers and Smith, 1971, state that only 190 of this split leaver model where made.
The Pettengill revolvers where made by “Rogers, Spencer & Co’ of Willow Dale, New York in the late 1850s. This example is a 6 shot 31 caliber pocket, with a 4 inch octagonal barrel and split loading leaver. Overall the revolver measures 10 inches.
The book ‘American Percussion Revolvers’ by Sellers and Smith, 1971, state that only 190 split leaver models where made.
The top of the frame is marked ‘PETTENGILL’S / PATENT 1856’. The bottom of the frame is marked ‘RAYMOND & ROBITAILLE / PATENT 1858’ This is partly obscured by the trigger guard.
The serial number of ‘113’ appears on the loading leaver, cylinder and faintly on the butt.
The action works as intended with a weak hammer fall. The cylinder has some play on its axis. The post front sight has been broken off.
The grips show age with some chips missing on the left side grip.
Over all this very unique and rare percussion revolver is a sharp gun.
Sold as a collector item only.
Price includes shipping in Australia, lay buy available.
Please be aware that there are licensing requirements for this item in some jurisdictions.
Stock No. R54P 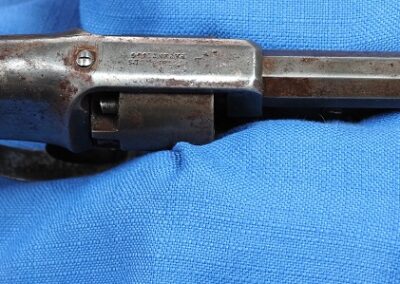 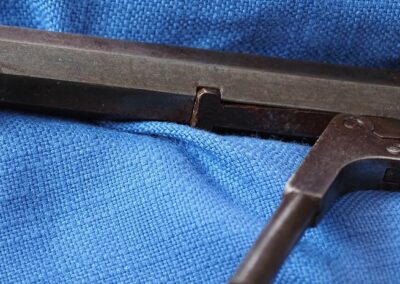 To contact Steel & Shot about this item please complete the form below: